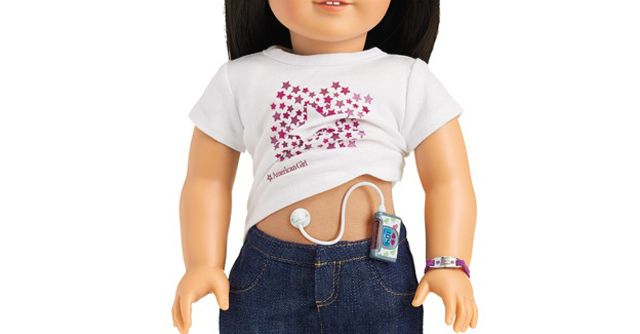 When I was growing up, I had “Addy” the American Girl. I held on to her for years and recently gave her to my nieces so she can enjoy a second generation of family. I can’t imagine how it would have been if she had an insulin pump on her hip and a medical alert bracelet on her wrist, just like me. But because of American Girl, this is now a reality.

American Girl just made an awesome move toward inclusiveness. Starting this year, kids with diabetes are able to give their American Girl dolls diabetic care kits.

The new doll accessory comes after a powerful petition from a young girl with diabetes received over 4,300 signatures. In January 2014, then-11-year-old Anja Busse created a Change.org petition calling for American Girl to offer diabetes-related accessories for dolls, not just for herself but for other kids like her.

Read the rest of the article here.

Like many of you in the DOC, at Medtronic we’re thrilled about this new accessory and think it’s an important step forward for diabetes awareness. We also LOVE the fact that a 11-year-old girl with diabetes dreamed up this idea and had community support to make it a reality. What do you think about this? Let us know in the comments for your chance to win one of three American Girl diabetes care kits! (Doll not included).