ALERT: Due to the inclement weather across much of the country, Medtronic deliveries are currently experiencing delays and there will be longer than normal hold times on the phone. Visit www.Diabetes.Shop if you need to place an order, get a sensor or belt clip replacement, or check the status of your supply order. X
Home  »  Lifestyle   »   Traveling Across The World With Type 1 Diabetes: Michael DiFiore 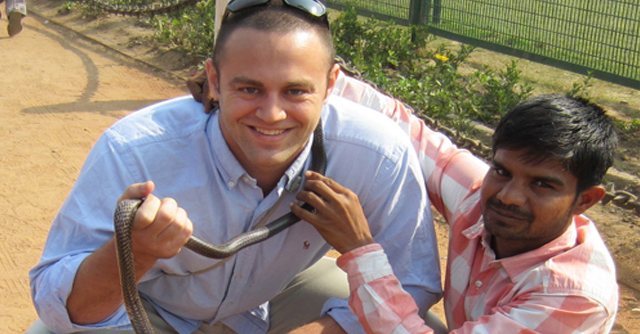 Just over 3 months ago, I left my job with Medtronic Diabetes to travel the world and find my passion. Last year, I had the fortunate experience of traveling to Japan for work. It should go without saying that India is not Japan. My experiences couldn’t have been more night and day.

Other than waiting until literally the last minute to send for my Visa, I got my vaccinations, and made sure I had more than enough insulin, test strips, infusion sets, reservoirs, sensors, and a backup meter. Finally, I made sure that all of this was in my carry-on bag. It is better to have them with me than potentially lose them with my luggage.

Flying out of Los Angeles, I flew to Minneapolis, Amsterdam, Delhi, and finally Kochi in the southwestern coastal state of Kerala. I spent roughly 26 hours in the air, plus another 11 hours in layovers, and crossed 13 time zones. I did a temporary basal rate of 110%, since I would be so inactive on the plane and made sure to bolus appropriately.

Airport security is very different in India, and soldiers with machine guns are common. I would highly recommend having a doctor’s note for your pump if not at least the airport card that came with your pump to print. Insulin pumps aren’t something that is seen very often in India, but luckily, there was a senior officer that actually knew what it was.

I was along for the ride on this journey, since I was invited by a friend to join him and his wife’s Indian side of the family. They gave me a very unique experience of India. I am originally from the South (Georgia to be exact), and I thought I knew what hospitality was, but India taught me otherwise. We were welcomed with a homemade feast and they made sure we were full. It took me two meals to figure out how to graciously say “no”, but if I hadn’t, I could still be sitting at that table eating. I also learned very quickly that my gluttony required a dual-wave bolus, which sometimes would be up to four hours.

At one gathering, there were 50 family members, and apparently, that was excluding a large number that were working internationally. Amazingly, one of the family members was one of the few doctors in India that prescribes pumps. So it was neat to be able to discuss diabetes with him.

Most of the time I stayed in a house, but we did stay in some hotels. The last hotel I stayed in was in Delhi, by myself, and it was a cheap one. I got what I paid for. There wasn’t a fridge in the room. Luckily, I had brought emergency carbs from the States, but having a fridge in your hotel room is something to consider. With regards to my insulin, being at room temperature while I was there was fine.

It took me 18 years to learn how to eat with a fork, but only half a second to remember how to eat with my hands, as it is culturally acceptable in India. Most of the food wasn’t fried and was gluten free (I have celiac disease), but whether vegetarian or omnivorous, some form of carb is typically used to soak up the gravy of the dish. Carb counting was definitely replaced by ‘Guess the Carbs’ on this trip, given the size of the meals and often no way of looking up the carb information. I would often find myself asking “how many pieces of idli have I had?”

India is rich in culture and history with an amazing cuisine, but just as it is an adventure for the traveler, it will be an equal adventure for your diabetes. The End…or is it just the beginning?