ALERT: Due to the inclement weather across much of the country, Medtronic deliveries are currently experiencing delays and there will be longer than normal hold times on the phone. Visit www.Diabetes.Shop if you need to place an order, get a sensor or belt clip replacement, or check the status of your supply order. X
Home  »  Lifestyle   »   Diabetes Show and Tell: Karen Graffeo 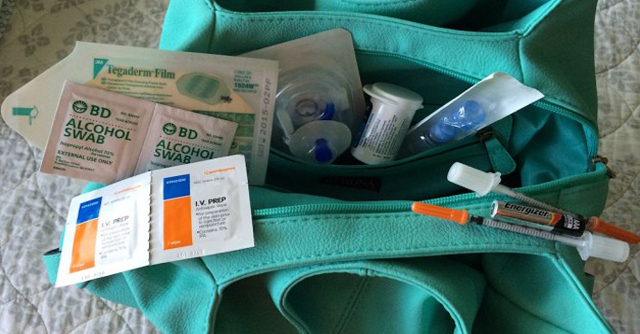 Q. What diabetes items do you typically carry in your bag?

I’m a chronic over packer, so it might be quicker to tell you what diabetes items I DON’T carry in my bag! But seriously, no cute little clutch bags for me – I carry a big purse loaded with diabetes supplies. The front pocket of my purse holds my meter case packed with the meter, lancing device, test strips, emergency syringes, and a spare battery. In that same front pocket, I also carry a cosmetic bag filled with glucose tablets and fruit candies. When I’m low, I really appreciate not having to dig around my huge purse to find something to treat with.

I also have more diabetes supplies in the inside pocket of my purse. There you’ll find a spare infusion site and reservoir, alcohol wipes and IV Prep wipes, another battery and a few more syringes, some Tegaderm tape and a spare canister of test strips.

Q. What is your favorite awkward diabetes moment?

My favorite awkward moment was awkward for someone besides me, and to me, it was pretty funny. I was out one evening with a bunch of friends, and when we sat down, I took out my meter to test. (This was quite a few years ago and I was using a meter that was pretty big). My friend’s new boyfriend leaned over to the person next to him and said “Wow, what’s with that big cell phone Karen has?” When my friend explained it was actually a blood glucose meter, he was pretty embarrassed about making that remark.

But then, a month or so later, we were all at our friend’s house for a cookout. As I pulled out my pump and started to bolus, this same guy said “Enough with the tweeting already, Karen!” I explained what I was doing and he immediately said he felt like the biggest idiot for making that mistake yet again. He definitely felt very awkward, but I got a good laugh over it!

Q. Tell us about the most memorable time explaining your diabetes to a new friend, significant other, or colleague?

When I was younger, I just wanted to fit in with my friends so I hid the fact that I had diabetes. The longer I kept it a secret, the harder it was to think about letting them know. Many years later, I had a bout with a stomach virus that landed me in the hospital with DKA. I decided it was the perfect opportunity to tell my friends that I had diabetes the whole time they’d known me, and to explain what it all meant. I was really nervous and they were very surprised, but from the start they’ve been so supportive. I wish I had told them all sooner.

Q. How do you reward yourself for practicing good diabetes management?

I know this is wrong, but I totally reward myself with food. For example, after a good endocrinologist appointment I might go out to dinner at this great Mexican restaurant near my house. Eating Mexican food pretty much guarantees a night of rough blood sugars, but indulging is my reward for a diabetes job well done. This isn’t the best of habits though, and I really should break this one and find a better way to reward myself.

Q. Who is your diabetes superhero and why?

I think I’m most in awe of kids with diabetes. Living with diabetes isn’t easy for anyone, but the children I’ve met are so courageous and handle everything so well. It’s actually the complete opposite of how I handled diabetes when I was their age, and I definitely admire them for doing things much better than I did!