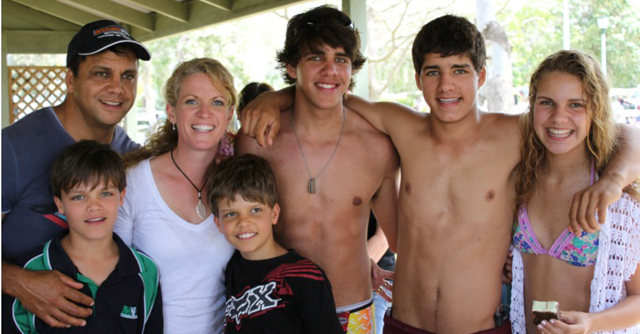 Every now and then, I meet a person with diabetes who stands out so much that this encounter is added to my list of those meetings I will never forget. Steve Renouf is a world famous Rugby player from Australia who during his successful sports career became one of the greatest players to have ever played in the Brisbane Broncos Club. Steve and his wife Elissa have been married for 22 years and they have five children. I should also mention that he has type 1 diabetes and wears a Medtronic insulin pump, and so do four of their five children. Recently Steve and Elissa visited Medtronic to share their story and I had the pleasure to interview them for The LOOP. Here’s what they had to say!

Q. Steve, thanks so much for joining us today! Jumping right in to things, can you tell us a little bit about your experience being diagnosed with type 1 diabetes while you were a professional rugby player?

A. Steve: Growing up, there were 12 kids in my family -eight girls and four boys. I was the only one that went on to play professional sports. I became a professional rugby player when I was 17 and was diagnosed with diabetes five years into my career when I was 22. I was young, fit, and no one in my family had it? I thought, “Why did I get diabetes?” That was a bit of a mixed feeling for me at first, but I got over it pretty quickly.

Q. Did your diabetes diagnosis affect your game at all?

A. Steve: I don’t think my rugby experience changed much after my diagnosis. Being a professional athlete, we had access to the best medical people and the lifestyle lends itself to a healthy disciplined routine, so diabetes fit in with that. During training and on game day, I would constantly test. I’d get to training a little bit earlier, run tests, and drink some Powerade.

Q. What advice would you give people who have concerns about managing diabetes with an active lifestyle?

A. Steve: That it can be done if you really want to do it. History is showing. I was diagnosed at 22 and finished my professional rugby career when I was 31. In the sports world, we talk about overcoming all kinds of adversity. It doesn’t matter what’s been thrown at you; you “get back up on the horse,” as they say.

Q. Elissa, can you tell us about how diabetes has impacted your family beyond Steve’s diagnosis?

A. Elissa: We had 5 healthy children. Within two years, three of them were diagnosed. And our fourth diagnosis happened five years later. To add to that, two of them also have celiac disease. It was a huge impact on our family, it really was. And I went through the grieving process with each one of them. However, they are still very active, healthy children; it just takes a little more time and organization to keep them that way.

Q. And what kind of impact did it have on you, Steve?

A. Steve: It’s your child, so I think that’s when it becomes real. It doesn’t matter whether you have 1 or 4 kids with diabetes. You treat them as individuals, and you feel for them, you really do. People will sort of think that you have one, so it’s just easier if all of them have it. It’s not, because they are all completely different. One’s high, one’s low, one’s normal, one’s sick.

Q. How did the insulin pump help enhance the journey your family was on?

A. Elissa: As a parent of a type 1 child, it’s almost like you are that child. You just can’t feel the hypos. You’ve just got to be more alert when you have children. I was the pump before the pump. The pump has given me freedom and given our children a lot of freedom. Because they don’t always have to converse with me about their management now, I don’t have to keep on telling them what to do. Its’ given them control, and released me of a lot of pressures.

Steve: It doesn’t matter what is thrown at you. We look at diabetes like at least it can be controlled, and as long as you control it you can live a normal life. The pump is discreet so you just pull it out and push a few buttons, it’s very controlled. For us, it’s perfect.