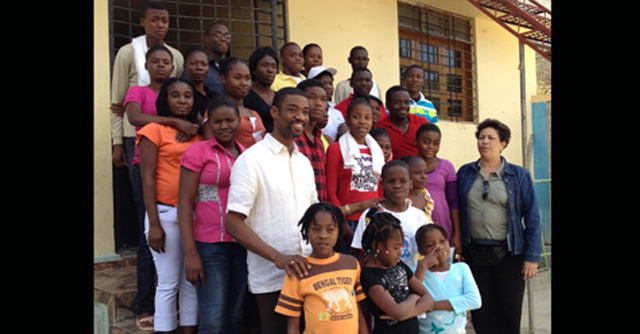 Editor’s Note: Today Dr. Kaufman shares her closing thoughts on her experiences from her most recent trip to Haiti, where she helped with the first-ever diabetes camp in Haiti. If you’re just now joining us for her story, please be sure to check out Return to Haiti: Part 1 and Return to Haiti: Part 2.

We have left Haiti, but in many ways Haiti has not left us. It is hard to describe the effect that an experience like working in Haiti has on you. Most of the time you feel overwhelmed with the enormity of the problems encountered by the average Haitian, let alone a child living in Haiti with diabetes. Your senses vacillate between being assaulted by sights of the tent cities still dotting the landscape, and rubble and sewage admixed with piles of garbage overflowing in rivulets, to being soothed by the beauty of a mountain resort with wild orchids and ginger plants. And at all times you marvel at how the doctors you meet – particularly Nancy and Philippe Larco and 81-year-old Rene Charles – navigate a system that would drown you in a matter of minutes if you were left alone.

Through FHADIMAC, which they founded and continue to support decades later, the Larco-Charles’ have been able to be viable members of the worldwide diabetes community, advance care for people with diabetes in Haiti, perform diabetes screenings to confirm that soon Haiti will be facing a diabetes epidemic, and work with Life for a Child and Insulin for Life to assure the children in Haiti have insulin and glucose strips to stay alive. And in the midst of this, somehow you find yourself at their side – and accompanied by Merith Basey from AYUDA and Evelyne Fleury-Milfort your ultimate role model for giving in Haiti – running the first diabetes camp ever in the county. You visit a clinic that is a joint effort between Israelis and Haitians outside Port au Prince and realize that the challenges of the overcrowded, barely functional capital city are magnified in the countryside. Patients are lined up outside, waiting their turn to be seen; some you can help and others you cannot, an appalling concept to those of us who rely on scans and labs and state-of-the-art therapies. Instead, you imagine the dismal outcomes these people face as you gaze into suffering eyes. From a breast mass likely already metastasized, to a diabetic foot ulcer likely never to heal, to a woman pregnant again and desperate because she can’t care for the children she already has, the hard working Israeli and Haitian health care providers do what they can in a system so constrained and minimal.

On our last day in Haiti, we lectured to 40 pediatricians at the Haitian Pediatric Society. In the main medical society building with only one barely functioning toilet and filled with 20- or 30-year-old books on the shelves, we tried to teach these eager doctors the signs and symptoms of diabetes in the young to improve the near 85% mortality rate at onset. If they don’t recognize diabetes, start IV fluids, give insulin, and reverse the severe metabolic disturbances of uncontrolled diabetes at diagnosis, there is no chance these kids will survive. And if they do, and Nancy Larco enrolls them in Life For a Child and they receive the treatment for diabetes that has not been used in the developed world for decades but remains relegated to the developing world, then children will survive but not with health and a future. Don’t we owe them more than that? So we have dreamed up some plans – plans to advance the care offered to children in Haiti to bring it a few small steps closer to what we offer, and if we are lucky, plans to help start a microbusiness – perhaps beading diabetes utility bags – made by Haitian people touched by diabetes and sold to people with diabetes worlds beyond. After all, doesn’t that diagnosis make us somehow all aligned, all connected and all concerned for each other?

The daughter of one of the Haitian pediatricians joined her mother for our lectures. She was a tall attentive well groomed 22-year-old, who spent part of her life in Haiti and part in Boston. She just finished college in Boston and is trying to decide what she wants to do – likely public health – but where? Will she come back to Haiti and continue the struggle from there, or try to change it from outside? We could palpate her angst, but more important, was her commitment. It seems that although many of the advantaged in Haiti have sent their children out of the country for school and for safety, many of these kids – including Nancy and Philippe’s – actually want to be back and to give back. They are Haiti’s future and must be supported and nurtured.

The most important thing we had reinforced from this trip is that it takes perseverance to make a real difference. We learned that, and so much more, from Carol and Mark Atkinson. After years and years, and trip after trip, they have incorporated Haiti into their psyche, with true understanding and true insight. What they have done is more than monumental, more than anything we have ever seen, and something that all of our colleagues need to know about. They have helped Haitians transform a corner of their own world – and stood by their side – but not taken over the command. I am sure there is a word for what Mark and Carol have done in every language, in every culture – and I am sure it underestimates it in each of them.

After Haiti, we flew to a meeting in Barcelona. Unfortunately for all with whom we talked, we harangued them about Haiti. We got a good cup of tea, finally, we attended a great meeting, and had fun with colleagues from around the world. But our thinking, our perseverating about Haiti isn’t over yet.