COVID-19 update: At this time there are no interruptions in our ability to manufacture and supply product. Our clinical team has instituted virtual video trainings for new pump and CGM customers to ensure continuity of service. Please click here for more information. X
Home  »  Lifestyle   »   Pumping in Kazakhstan: Might Not Be What You Think 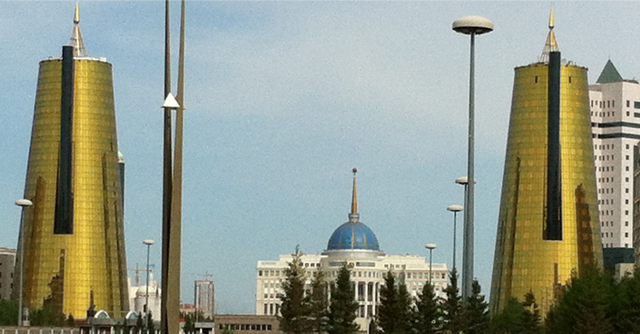 Kazakhstan is one of the best kept secrets in the world. If you think it is what was portrayed a few years ago in a rather irreverent movie, you are totally wrong. It is a vast country stretching across the Silk Road from Iran to China with a diverse ethnic/racial population and incredible resources – oil, gas and minerals – that have enabled the government to advance education, housing, industry and health for its people. I went there to assess and advance Medtronic’s partnership with the Kazakh Ministry of Health to place 790 children on insulin pump therapy in a few months and to follow their outcomes for one year.

My time was spent in Kazakhstan’s two largest cities, its new and old capitols, Astana and Almaty. Astana is 12 years old and filled with new towers, malls, and wonders; Almaty is ancient, revealing what it was like before and during the Soviet time. I was accompanied by some of Medtronic’s finest – Kirk Monson and David Okhoton – and we worked together with the Kazakh Medtronic team led by two highly committed, intelligent and engaging women filled with grace and charm – Aigul Muratalina and Gulzhakhan Shamshatova.

Aigul and Gulzhakhan had already established a highly credible education program and support for the Kazakh endocrinologists, and I was thrilled to be able to add to it. We had an advisory meeting with 12 physicians (and a working lunch and dinner) and we all rolled up our sleeves to get to the nitty-gritty of dosage adjustment. You could see light bulbs going off throughout the day, in part because they had already been trained and retrained on all aspects of pump therapy. An adorable 7-year-old boy, who was the size of a 5-year-old, was presented because he has hyperglycemia except for during exercise, when he gets low. So we changed his pump settings, learned about management during exercise and then continued to see patients in one of their inpatient units and in one of their clinics. The patients were adorable, and excited to be on pumps, although the 12-year-old girl, who looked like any teenager anywhere, did roll her eyes occasionally at what I said about her diabetes control.

The children going on pumps have not been well managed in the past. Many of them have growth failure, delayed puberty, stiff joints in their hands (something no longer seen in the US), big livers and very high A1Cs. Parents keep incredible logbooks, doctors upload to CareLink and review records, and Medtronic supports their efforts with a 24-hourHelpLine, ongoing education and data collection. I will admit I didn’t meet one male doctor, and as far as I can tell, women dominate medicine, except for at the very top. At least their glass ceiling appears to be as high as their mountains.

I did take a little time to see some sites, museums, the mountains, the Kazazh monuments, and I realized how proud they are of their nomadic past. The Kazakh people revere their democratically elected President (for life), or at least appear to. His picture and name are everywhere. Around since the Soviet time, he has taken his country’s riches and given them back to the people of Kazakhstan. They live well, get health care for free, including many recent advances, and have a standard of living that looks like it rivals ours (if not exceeds it). And now that includes insulin pumps and supplies for children (they have committed to putting half of the children with type 1 diabetes between 5 and 15 years of age on pump therapy). We ate – at least we were offered food – non-stop, including the great Kazakh delicacy, horse. Needless to say, I didn’t get near it.

In summary, what an experience to see a government committed to changing the lives of some of their most vulnerable citizens, to see a young and old city, vibrant and growing, to meet hard-working, compassionate, committed people and to be one of the few who has witnessed firsthand that Kazakhstan is not what was portrayed by a movie that put them on the map for most of the outside world. Enjoy the pictures of the cities and the doctors, patients and families.