COVID-19 update: At this time there are no interruptions in our ability to manufacture and supply product. Our clinical team has instituted virtual video trainings for new pump and CGM customers to ensure continuity of service. Please click here for more information. X
Home  »  Lifestyle   »   One Spooky Diagnosis Story 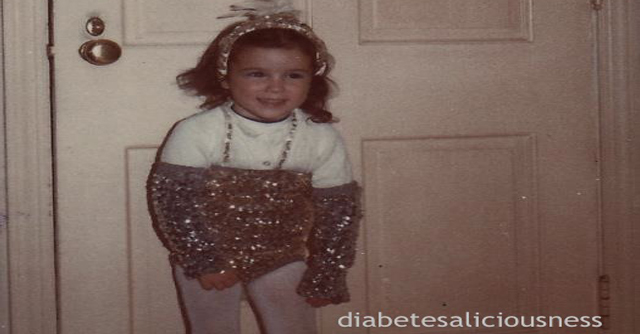 On Halloween, third grader Kelly Kunik anticipated dressing up, trick-or-treating, and eating candy with her friends. Instead, she was learning about insulin and what a diagnosis of type 1 diabetes would mean for the future of her childhood. Kelly now wears a MiniMed pump and serves as a blogger and diabetes advocate. We are so glad that she shared her Halloween diagnosis story with us! Leave Kelly a note of encouragement in the comments, and be sure to wish her a Happy Diaversary!

Halloween was big in my house, and not just for the endless candy opportunities, either. It was big for the costume and pageantry aspect of the holiday, and as the children of a former professional ice skater, we were all about the theatrics of the holiday. Quite frankly, theatrics and glamour were encouraged in our house, some might even say expected. It was up to my two older sisters, Cathy and Debbie, to come up with a costume for me before they were allowed to go out with their friends. And to give credit where credit’s due, they always came up with great ideas!

In nursery school, I was decked out in a silver sequin hand-me-down tap dancing costume that belonged to my older sister, complete with a showgirl feather headdress. In kindergarten, I was Princess Tiger Lilly, dressed up in my older sister Cathy’s brown vest and skirt, and decked out in my mother and sister Debbie’s authentic American Indian beaded finery, and a red feather in my braided hair. In the first grade, I was an award winning Kelly-In-The Box. My sister Cathy was the mastermind behind that costume and spent three days painting an actual cardboard box yellow with a clown on the front and tie-dyed suspenders made from ripped sheets for me to hold it up. I won the Best Halloween Costume Award in my age group in our town Halloween Parade. Kelly-In-The Box was such a hit that I wore that very same costume in second grade.

Third grade was different though. Usually the costume talk started in the second week of October, maybe third, but that year, nobody mentioned it. And finally Halloween was only a few days away, and I had costume ideas of my own. I either wanted to be Princess Leah or a Gypsy Princess – with leanings towards the latter. I wanted to breakout an actual velvet gypsy bedazzled corseted costume that my grandmother had worn as a young woman performing in The Gypsy Queen Production back in England, before she migrated to Canada and married my grandpa. My mom kept the costume wrapped in tissue paper and locked in her cedar chest, and each one of my older sisters had previously worn the costume for Halloween at one time or another – and I wanted 3rd grade to be my year!

I brought the Gypsy Princess idea up to my mom, but she just looked at me and said, “We’ll see, Kel.” She looked really sad and worried when she said it. Something was up in my house. My family would look my way and whisper things like, “She’s too skinny, “She’s sleeping a lot”, and “She’s always thirsty.” And then there was the one that embarrassed me the most, “She wet the bed.”

Finally, the day before Halloween came around and I was forced by my sister Debbie to pee on something called Tes Tape. The results weren’t good. My parents spent a lot of time on the phone that night coordinating with CHOP (Children’s Hospital of Philadelphia) and everyone was rushing around. I wasn’t allowed to eat anything without asking, which was strange, and someone always had to be by my side. There may have been an insulin shot that night with dinner, but that part’s really cloudy, and I’m not one hundred percent sure. The next morning, my parents and I drove to Philly bright and early. After multiple tests and exams, I was admitted to CHOP and officially diagnosed with type 1 diabetes.

I don’t remember crying when I found out, but I do remember being mad. I had plans. I was going to be Gypsy Princess, bang on a tambourine, put on a show, and get lots of candy. Instead, I was dragging around a portable insulin drip and sipping diet Kool-Aid. I tried to convince my nurse (who was dressed as a clown) that the test results were “inconclusive” and that if she just let me go home to trick-or-treat, my parents would bring me back the next day. Nurse Clown was the one who broke the news that I did indeed have diabetes. That was the exact day I started hating clowns.

Nurse Clown told me I could go trick-or-treating, but that I’d have to wear a costume that the hospital provided and I could only get dietetic candy. I said NO WAY and hung-out with my parents until they finally went home. And then I watched TV all night until about 10 p.m., when I started to cry in my hospital bed, alone and watching television. I was scared; I was mad, I was tired of being brave and I missed my family terribly – and I wondered if they were crying and scared and missing me, too.

But I refused to cry in front of my parents – or anyone for that matter – I kept my tears in check until visiting hours were over. Three weeks later I went home, began injecting my own shots a few weeks after that and life went back to some semblance of normal – albeit a new normal.

The following year (4th grade) was the year I finally got to dress up as The Gypsy Princess – And you know what? I totally worked it! Afterwards, I did what every kid did, dumped my candy on the living-room floor, traded, and divvied up my stash with my friends.

I was allowed to keep some of the chocolate and candy for future snacks or to treat lows. About a week later, the mystical candy would disappear. And yes, I searched the entire house for the missing candy bag for days. Sometimes I’d find it and go to town. Still, missing candy stash or not, I made sure never to miss another Halloween as a child, or as an adult for that matter. And I ALWAYS made sure I had fun! I still celebrate Halloween and my Diaversary – BIG TIME. I celebrate living and my life and my accomplishments, both big and small. And I celebrate the fact that I’m still here. My celebration usually involves an awesome costume, tasty treats, and good friends!