COVID-19 update: At this time there are no interruptions in our ability to manufacture and supply product. Our clinical team has instituted virtual video trainings for new pump and CGM customers to ensure continuity of service. Please click here for more information. X
Home  »  Lifestyle   »   MasterLab 2015: Raising Voices For Diabetes Advocacy 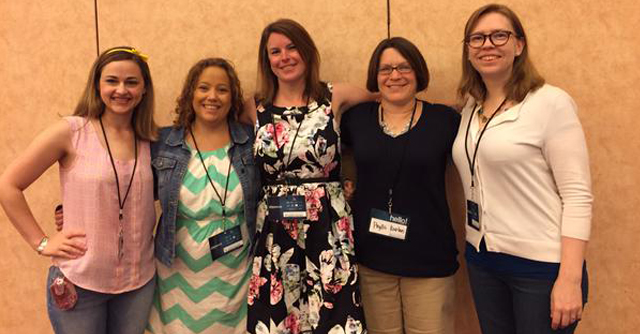 We had a great time sponsoring the second annual MasterLab Diabetes Advocates conference again this year in Orlando. Hosted by the Diabetes Hands Foundation, this event brings together leaders from across the diabetes community to speak and learn about diabetes advocacy. Wanting to provide advocates in the Diabetes Online Community (DOC) the tools to sharpen their advocacy skills, we decided to run a contest, asking what diabetes advocacy means to them, for the chance to win one of our tickets to the event. We received over 260 survey entries, and were so impressed with the number of amazing submissions received, we decided to select three people to attend this event (it was impossible to choose just one). Meet Phyllis Kaplan, Charli Guerin, and Kristin Ewing.

Kristin was diagnosed with type 1 diabetes in 1990. Residing in Oklahoma, she is very active on Twitter and has a personal blog where she shares her positive outlook on life.

Phyllis was diagnosed with type 1 diabetes in 1973. She is passionate about gaining support for adults living with diabetes, and currently serves as a MiniMed Ambassador in Massachusetts.

Charli was diagnosed with Latent Autoimmune Diabetes in Adults (LADA) in 2011. She lives in Kansas, is active in her local JDRF and ADA, and is well known in the DOC.

With one unexpected phone call from Naomi at Medtronic, I was suddenly making plans to attend the 2015 MasterLab in Orlando. Despite devouring everything I could find about MasterLab and asking people on Twitter, I had absolutely no clue what to expect. I also had no idea what it would be like to spend so much time with two other ladies attending on behalf of Medtronic who I had never met before. The obvious fear was what if we didn’t get along at all. That concern flew out the window within seconds of meeting both of them. The fun we all had together, both in the sessions and in our spare time, was icing on the cake to this experience.

Despite only being a day and a half, I’m still finding all of the information I walked away with to be slightly overwhelming. Since returning home, I often find myself reflecting on everything I learned and experienced. One of the speakers who stood out the most was Tom Boyer, Director of Government Affairs at Novo Nordisk. The gist of his speech was about finding our voice in order to speak up for the diabetes community. He has been heavily involved in diabetes advocacy efforts for decades, and of the 1,800 advocates he trained with in the 1980s, only three are still involved. As Mr. Boyer said, we’ve gone from setting the temperature to reading the temperature. If we speak up and make our voices heard, we’ll go back to setting the temperature. It truly doesn’t matter how much or how loud we advocate, any advocacy effort will make a difference because we aren’t being silent.

Nearly every speaker mentioned how it doesn’t matter which type of diabetes we have, we’re all impacted by it and need to fight for better lives for all. We all need access to the supplies needed to stay healthy. It makes me wonder how powerful the diabetes community could be if we raised our voices as one large, all-inclusive group, instead of having friction between the types.

Dr. Kenneth Moritsugu, former VP of Global Professional Education & Strategic Relations at Johnson & Johnson’s Diabetes Solutions Companies, urged us how we must get involved because we can no longer play spectator. What he said that stuck out the most to me though was that each of us is the human face of diabetes. As we advocate for diabetes, we need to make our faces seen. It makes diabetes so much more real to others who are not connected to diabetes.

Participating in MasterLab was an incredible experience, and I left with a renewed spirit and belief that I can, even as one person, make a difference in diabetes advocacy.

I have always been my own diabetes advocate, standing up for what I believe. I could write pages of how I’ve stood up for myself and diabetes, but I’ve always felt I could do more, reach more people, and have more of an impact, if I only knew how. Just as I was going through this internal struggle, I learned about MasterLab!

It was powerful and engaging to be in a room with diabetes advocacy leaders. Throughout the conference, I’d sit back and think “Wow, all of these people from all over the world are here to learn how to do more. Wow!” There was also an underlying theme of support – for parents of kids with diabetes, for each other when our meters and pumps were beeping, and encouraging each other to follow our passion.

You know you’re at the right conference when you can honestly say you learned something new in each session. I learned:

I’ve primarily used Facebook to share my own ups and downs of life with diabetes, showing having diabetes is more than taking insulin and counting carbs. I never really considered that as advocacy, but learned education is the first step. I have also learned how to maximize all types of social media, and social media advocacy can instill change.

When I was diagnosed with LADA, I felt alone. It was a scary diagnosis. “How could this happen to me?” But, soon, I found the DOC and realized I didn’t have to be alone. I could be an advocate for my disease and help spread knowledge and understanding in a world that shames diabetics. It was through the DOC I learned about MasterLab. Walking into a space uncomfortable to you can be difficult, but somehow I knew this wouldn’t be the situation at MasterLab. I knew very few people going, and met even fewer face-to-face, but I was walking into a room full of people who know exactly what I’m going through. We were all there for the same reason: to learn and to become better advocates.

The other biggest diabetes stress is the mental health aspect. Look at the numbers. Be perfect. Control your lifestyle. Watch what you eat. Explain to people you aren’t wearing a pager. Face the ignorance head on, every day, for the rest of your life. Be understanding. Stay positive. Sounds easy, huh? Well, it’s not.

Into the spotlight walks Marina Tsaplina, founder of the Betes Organization. She spoke softly, but assertively, and her smile warmed the room. Then, she revealed she has walked the same path many of us are walking, and still walks it. She touched on the mental health aspect of diabetes (and in everyday life) like I have never heard someone talk before. It’s true. You hear about people doing so well managing their diabetes, and somehow a little more defeat takes you over. You feel like you can’t keep up, or that you aren’t living your life efficiently with diabetes or as an advocate. Marina’s words marinated so well with me, and her focus on mental illness was such an important part of this conference. I hope to see more of this in the future.

All of the speakers were important to making this conference educational and informative.

This conference helped shape what I want my advocacy to look like and propelled me to start immediately.