COVID-19 update: At this time there are no interruptions in our ability to manufacture and supply product. Our clinical team has instituted virtual video trainings for new pump and CGM customers to ensure continuity of service. Please click here for more information. X
Home  »  Innovation   »   Making A Diabetes Difference In Haiti 2014: Part II 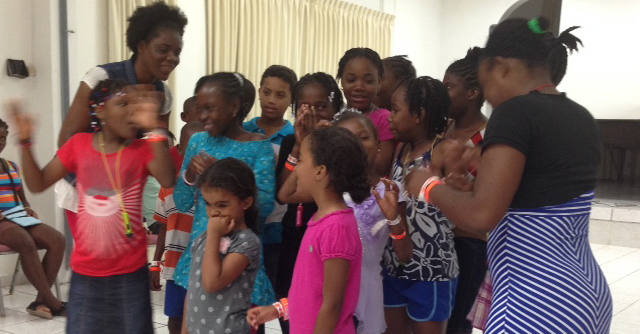 A couple days ago, Dr. Kaufman shared her initial thoughts as she arrived to Haiti for the fourth time with her husband, Neal, to help out the first ever diabetes camp for the third year, Making a Diabetes Difference in Haiti: Part I. Today, Dr. Kaufman reflects on her four-day journey helping to improve diabetes care and outcomes for children in Haiti.

The rest of the days of camp were as incredible as the first as soon as we adjusted to what it means to do things in Haitian time. Everything starts late and takes longer. Blood testing and insulin dosing are the best examples. We had three teams, and as soon as the kids did their blood sugar tests, they swarmed around us to get their insulin injections. Almost all of the children are on “70/30”, which is a mixture of 30% regular and 70% NPH insulin, injected two times a day. Children in the United States haven’t used “70/30” for at least three decades. But for the Haitian population, it is the easiest insulin to use and cheapest insulin to get. However, two shots a day don’t really control blood sugars for the entire day. Most children in the U.S. with type 1 diabetes take 4 to 6 insulin injections per day, or use an insulin pump to get better blood sugar control. Although “70/30” is anything but ideal, it is good enough to keep these Haitian children alive and, for now, mostly healthy.

We were swarmed by kids (we had a total of 64 – our biggest camp so far) and Creole translators at our side. At dawn and dusk, there was maximal mosquitos and minimal ability to see the syringes and camper charts. Together with the children, we decided on dosing amounts, injected arms and tummies, and discussed why numbers were going awry. We could discuss this, because for the first time, the kids were getting their blood sugar tested 5 times a day. More testing facilitates better pattern detection, especially compared to what can be gleaned when they are home, only being able to test 1 or 2 times a day, if that.

For some of the kids, the lights really seemed to go on. They started to understand why their sugar levels were high and low, and how food and exercise impacted their levels. They were able to decide what dose of insulin might work best for them when they were injecting. But for some of the other kids, they never seemed to grasp it. Perhaps they simply lacked the education or the ability to understand diabetes, but whether they got it or not, we know many of them have many pressing issues in their lives to deal with. They live in tents or are homeless. They are orphans, hungry, victimized, and/or traumatized. Life in Haiti is tough enough. For too many of them, there’s little room left to deal with diabetes.

All of the children seemed to really enjoy camp, and the support, mentoring, friendships, and gifts. Nora, Nan Zaitlen’s sister, gave us flashlights, with a battery, for each camper, which is a valuable item in Haiti. The kids appreciated the Haitian and American doctors and nurses, FHADIMAC (our host Diabetes Association run by the incomparable Nancy Larco), and the AYUDA volunteers. The children felt they were valuable enough to have a diabetes camp. This is in contrast to what many of them heard when they were first diagnosed, that it wasn’t worth the investment to keep them alive.

During the closing ceremonies, the children wound a long piece of yarn around themselves and passed it across a circle to a fellow camper to symbolize how they are all interlocked. When they spoke about their experience, it was touching as always. “Diabetes is the best thing that happened to me, even though I hate it.” “Some people care. I’m not alone.” “Seeing the FHADIMAC leaders with diabetes showed me I can live to be old.” (Many of the leaders were considered ‘old’ in their early twenties). “My counselor has diabetes and he has muscles. I didn’t know someone with diabetes could have good muscles.” “When I got diabetes at age 11, my parents were always watching me. It was not like it had been before, when I could be on my own. I know now that if I take care of myself, they will give me more freedom.”

All of the kids were given a T-shirt from FHADIMAC with the words, “I am taking care of myself”, and got together with a sign that said, “We can take care of each other.” As in the previous two camps, the common theme was this was the best four days of their lives.

After we finally crammed all of the kids like sardines into their buses to go home (the group from Saint Marc was all jammed into the back of an open truck), Neal and I got together with the other staff and volunteers to reflect. There were hundreds of things we could have done better. We need more training for our young adult leaders from Haiti if we are going to truly help develop them. We need to get the kids regular insulin so they can more aptly correct their blood glucose levels at home, and then really teach them how to dose their own insulin. We need to continue to try to advance their care in multiple ways – more strips to measure blood glucose, more A1C testing, and other critical labs, etc. But for right now, we are just going to relish in the fact that we pulled off these 4 days without any medical emergencies.

The campers, AYUDA volunteers, and FHADIMAC staff all benefitted in their own way from this experience. Personally, Neal and I are thankful we didn’t have to eat goat or get bitten by one of the killer geese, and are deeply appreciative of just being here, even if everything we did started an hour late and took two hours longer.