ALERT: Due to the inclement weather across much of the country, Medtronic deliveries are currently experiencing delays and there will be longer than normal hold times on the phone. Visit www.Diabetes.Shop if you need to place an order, get a sensor or belt clip replacement, or check the status of your supply order. X
Home  »  Health and Wellness   »   Haiti 2016: Finding Hope Among Poverty, Political Turmoil And Diabetes 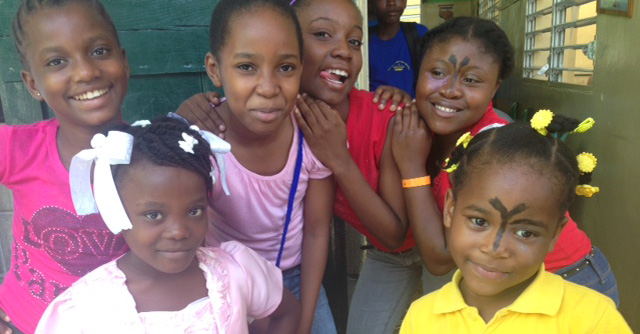 Our 6th annual trip to Haiti has begun, and we are at our 5th camp for children with diabetes. We are in a new venue for camp – a girl’s primary school with old chalk boards, desks (we barely fit), and sun, heat and bugs (there are mainly flies, fleas and nits/gnats, not the feared Zika, chikungunya and Dengue-carrying mosquitoes…we hope). Other than the camp site, little has changed. We know many of the campers and the counselors – called our young leaders – since more than half have come to camp every year. When the campers piled off the bus (after a 7 hour hot and bumpy ride from the northern part of Haiti), or were brought by their parents (likely in TapTaps, the art covered ubiquitous cheap taxis that stuff in more riders than seats), they embraced us in typical Haitian manner – with a hug and a kiss on both cheeks. As we welcomed them on a dark street in Port-au-Prince filled with people still selling their wares and barbecuing food for sale, we were reminded that we still haven’t taken a walk on the streets of this frenetic city, and that we are always in the presence of a body guard.

Campers range in age from 6 years up to 23 years. The youngest camper wore a fancy pink dress the first day (somehow she didn’t even get dirty while we were covered in unbelievable grime) and her hair was arranged with bows and braids. She cried twice from low blood sugars, and once from getting her feelings hurt, but went running into her father’s arms at the end of the day to tell him how much fun she had. A 13-year-old girl was sick the whole camp, she is emaciated, in the poorest diabetes control we saw (and that’s saying a lot) and lives with an aunt. No one here seems to know what happened to her parents. And we had one severe low blood sugar, in one of the older boys. He was completely out on the floor and took too long to recover despite receiving a shot of glucagon. It’s harder for these kids to bounce back – if they do at all – from all the havoc diabetes can cause in children and young adults in Haiti.

So, while many of our campers are thriving, just as many are not. Those who are not have growth failure, sores that don’t heal, stiff joints, and big livers from poorly controlled diabetes. The chance they will live a long life is markedly reduced since they are at high risk of developing the dreaded complications of this disease as children – something that has not been seen in the US since the late 1970s. These accelerated complications occur despite Nancy Larco (the head of the Haitian Diabetes Association, FHADIMAC, and the country’s leading endocrinologist), her staff and her volunteer friends, Insulin for Life (the program run by Carol Atkinson that sends insulin and other diabetes supplies to Haiti and elsewhere), the Life for a Child Program (the program from the International Diabetes Federation that coordinates care for children with diabetes in Haiti and other parts of the developing world), Evelyne Fleury-Milfort (our Haitian-born CDE friend from Los Angeles who makes up our Haitian travel trio), and us. FHADIMAC is tearing down and building a new large space for the variety of medical services they provide to Port-au-Prince’s poor and under-served. Where they will get the money and resources to do all they plan is hard to tell – but succeed they will. But right now despite all of their amazing efforts – poverty, political turmoil (there were 54 people running for president – so many they were numbered and color coded), the continued aftermath of the earthquake, and hundreds of years of a complex devastating history – adversity wins out and robs these children of a decent chance to survive and thrive with a disease like diabetes.

We spend our time at camp teaching (the campers, the counselors, and eight pediatric residents who have joined us for the first time), checking glucose levels, giving insulin shots and teaspoons of honey (for low blood sugar levels). Too many of the kids still are food insecure, and the biggest topic of conversation is what happens if they skip breakfast or lunch or dinner, or maybe all three, how do they still manage their diabetes? Almost all of them remain on pre-mixed insulin (a mixture of fast and intermediate-acting insulin), the poorest choice possible for a child with type 1 diabetes, but the only real choice they have. Most tragically, they only have enough strips to check their blood glucose level one time a day (if that), so it is impossible for them to really manage their diabetes. And they face discrimination, blame for their disease, ignorance and voodoo.

We feel drained by the heat and humidity, we are too afraid to eat anything at camp, and we are drenched in Deet. But despite the rubble, the chaos of commerce occurring on the streets, wondering goats, and paralyzing traffic, camp gives us all hope – hope that the 84 kids who have joined us will somehow make it, will be healthy, and that Haiti will offer them what all children, particularly children with diabetes, deserve – the chance to dream.