ALERT: Due to the inclement weather across much of the country, Medtronic deliveries are currently experiencing delays and there will be longer than normal hold times on the phone. Visit www.Diabetes.Shop if you need to place an order, get a sensor or belt clip replacement, or check the status of your supply order. X
Home  »  Lifestyle   »   Diabetes Show And Tell: Scott 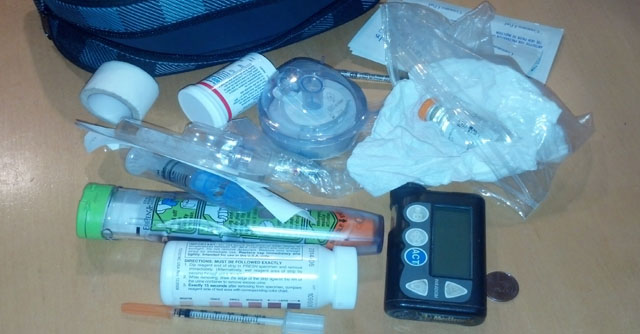 Scott was diagnosed with type 1 diabetes in 1981, at the age of seven. When he and his wife decided to start a family, Scott became more focused on his diabetes care; he connected with other people who have diabetes through online forums, and in 2006, started using an insulin pump. He finds balancing his family life, full-time engineering job, and diabetes advocacy work to be nearly as challenging as balancing his blood sugars.

Q. What diabetes items do you typically carry in your bag?

A. If I’m not going far from home, I generally just keep a tube of glucose tablets and my meter with me. The glucose tabs are always in my right pants pocket and the meter stays my left jacket pocket; that way it becomes routine and is plainly obvious when it’s missing. Stuffed inside my meter pouch is an extra syringe, AAA battery, coin, and some lancets.

For longer or farther trips, I take a school pencil-case, which I’ve repurposed to hold my emergency supplies: an infusion set and reservoir, vial of insulin, another pump battery, extra test strips, a syringe or two, roll of first-aid tape, alcohol swabs, and even an old MiniMed 515 pump. I’ve also got an EpiPen in there, just in case one of my kids should need to use it on me in case of an emergency.

Q. What is your favorite awkward diabetes moment?

A. There was a time my girlfriend had to call an ambulance to take me to the hospital Emergency Room because of a severe overnight hypoglycemic reaction. That alone wasn’t what made it awkward, but it directly led to her parents and my parents meeting each other (from opposite sides of my hospital bed). It was an introduction we hadn’t planned on making just yet, given the stage of our relationship at the time. Everything worked out OK, though, and we were married a couple of years later.

Q. Tell us about the most memorable time explaining your diabetes to a new friend, significant other, or colleague

A. To tell the truth, I can’t recall anything memorable about explaining diabetes, or anything at all for that matter. I suppose that’s a good thing – explaining diabetes should be uneventful. It’s the anticipation and the build-up that make it seem like it will be much harder than it is.

Q. How do you reward yourself for practicing good diabetes management?

A. I don’t. But I don’t punish myself for poor diabetes management either, so I guess it all evens out.

Q. Who is your diabetes superhero and why?

A. There are plenty of people in the diabetes community who’ve earned a tremendous amount of my respect. However, if there is one person who impresses me beyond comprehension, it is Bobby Clarke, the former captain of the NHL Philadelphia Flyers and inductee in the Hockey Hall of Fame. Throughout the 1970’s and early 80’s, not only did he play a very physical game, but he did so at such a high level, and did it without the benefit of the blood glucose meters, rapid-acting insulin, and other developments that we take for granted today. Personally, I always find it challenging to manage blood sugars along with intense exercise, but I have the ability to look at my CGM trends and temporarily adjust my basal rates. The tools back then were much more primitive.