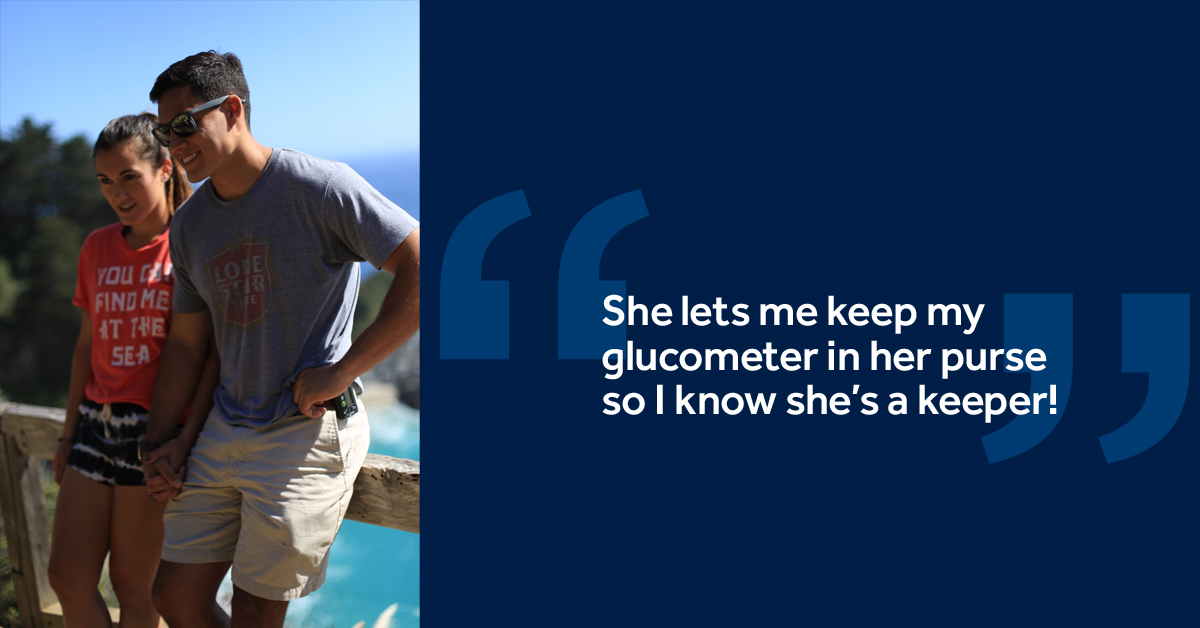 Dating can be hard! Dating while living with diabetes can be even more nerve-wracking. Today, I’d like to introduce you to, MiniMed Ambassador, Chris Fernandes. Chris has been living with type 1 diabetes since he was 9 years old and is now away at college and very active in sports and Greek life. He shares his thoughts on dating and when to tell someone about diabetes.

It’s normal to be nervous on a first date – “Where should I take her?” “What if we run out of things to talk about?” “What if she doesn’t like me?”

And then there are the added worries of going on a first date while living with diabetes – “Will she be uncomfortable if I check my blood sugar in front of her?” “Should I bring up that I have diabetes?” “Is she going to be grossed out by the blood?” “Should I just do everything in the bathroom so that she doesn’t know?”

Telling someone who you aren’t comfortable with, that you have diabetes and trying to explain everything that it entails is a difficult task. Most people have no idea what it means, or assume that you have diabetes because you ate too much sugar (I can’t tell you how many times I’ve had someone ask, “so did you eat a lot of candy when you were a kid?” … No). Furthermore, explaining it to someone who you are trying to make a good impression on can be even more difficult. It’s common to worry that you might weird the person out with the blood, injections, pump tubing, etc. – and these are all very valid reasons to be anxious about dating with diabetes. Deciding when to bring up that you have diabetes and diving into the explanation of the disease can be tricky.

I met my girlfriend through a mutual friend during my freshman year of college. We started by hanging out in a group setting, and for the first few weeks, things were totally casual. Eventually, I worked up the courage to take her on a real date. We went to dinner a few times and I took her to some events at my fraternity. During this time, I never explicitly told her about diabetes, but she did notice. When I ask her now, she says that once she first figured out I had diabetes, she didn’t really know what to think since she didn’t know much about it. However, it didn’t affect her interest in me. She now tells me that after noticing the amount of attention I had to give diabetes, and witnessing how frustrating it could sometimes be for me, she admired me more for not letting it get the best of me.

Over those next few weeks of the relationship, we grew close enough that she felt comfortable asking me more about it. Initially, I explained all the basics: how my body no longer makes insulin and the balancing act required. As we got further into the relationship, the more she wanted to know about diabetes so she could help ease any of my frustrations. After 7 months of being together my girlfriend knows a good blood sugar from a bad one, how my pump site and sensor work, and what to do if I ever need help. And, rather than being nervous about managing my diabetes around her, I know that she is my partner (and she lets me keep my glucometer in her purse – so I know she’s a keeper).

So, my advice with navigating diabetes and dating: let the conversations come up naturally. I think most people will be surprised at how often others are genuinely intrigued rather than uncomfortable when you explain diabetes to them. Furthermore, I think people gain a level of respect in recognizing the fact that we are constantly performing a delicate balancing act on top of the rest of life.

I know it can be nerve-wracking to tell someone new about a disease that constantly impacts your day-to-day life. However, it’s important to remember that at the end of the day, if the person really cares about you, diabetes definitely won’t stop them from pursuing a relationship with you.

Amanda Griswold started working for Medtronic in 2005, after graduating with a degree in Journalism. She’s held a variety of roles including sales, professional relations and marketing. During this time she also obtained her MBA. Amanda became personally involved with diabetes when she met her husband, who has type 1 diabetes, in 2008. They have a unique story about how they met, which you can read about on the LOOP blog. Since she knows how diabetes affects someone, she’s passionate about making life easier while living with diabetes, from products on the market to customer service. Amanda enjoys spending time with her husband and three young children.