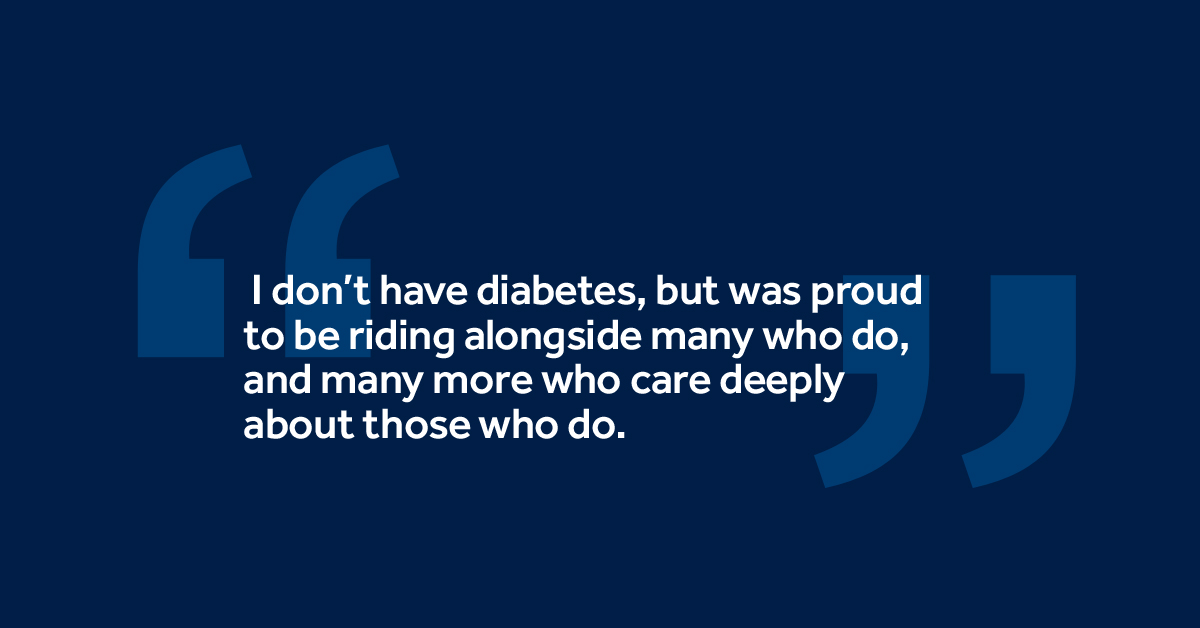 Editor’s note: Happy Diabetes Awareness month! This time of year there are many different ways that Medtronic employees raise funds and awareness for diabetes. Today I want you to meet Zach, a member of our Brand Communications team, who recently took part in the JDRF Ride to Cure Diabetes.

Death Valley is an extreme place. Even if you’ve never been there, I’ll bet you can create a mental picture of it. The heat. The dryness. The vast expanse of terrain devoid of plant life. It has its name for a reason. What better place to ride a bicycle as far as 103 total miles?

Back in June, I was attending the ADA Scientific Sessions in New Orleans, where we had an exhibit booth. One of our booth staff was Kyle, a territory manager from Memphis. Out of the blue, he asked me, “Hey, do you like cycling?”

“Oh,” he said. “Well, I’m organizing a Medtronic team to do the JDRF ride in Death Valley in October. It’s a century ride. Actually, a little more — 103 miles. Interested?”

I thought for a second. “Yeah, why not?”

My fate was sealed.

Over the next few months, I trained intensely (not true). I followed a carefully structured regimen to build up my endurance (another lie). The rule of thumb is that a rider should comfortably complete a 75-80 mile ride a few weeks ahead of doing a century. The longest ride I completed was 18 miles — less than one quarter of what I should have done.

I arrived in Death Valley a couple days ahead of the big ride, and got to meet our Medtronic employee ride team. We had a great mix of women and men from around the country. It’s pretty amazing how a team joining to endure a significant challenge together can breed fast friendships.

Before ride day, we had some time to see the sights around Death Valley. For such a stark place, it’s also bizarrely beautiful. We dressed up in our team ride kit and took some group photos at one of the more popular tourist spots called Zabriskie point. I should point out that we did not take our bikes. We looked ridiculous. I’m pretty sure that someone from Eastern Europe is laughing with his family at some vacation photos of us in spandex.

I was up at 5 AM, attempting to eat breakfast. Nutrition and hydration are the most important part of a long ride, especially in a place like Death Valley. I had to power the food down, because I was nervous. Start time was set for 6:45 AM. We were greeted by immediate headwinds. Not just any headwinds — sustained winds of 25-35 mph, with gusts up to 50 mph. Fast enough to blow over porta-potties. Yay. We pedaled on.

The ride is an “out and back,” meaning that wherever you stop, you are half-way done. The full ride would be 51.5 miles out. Ride organizers set cutoff times for each rest stop to get people back at a reasonable time. When reaching rest stop #3 just before 10 AM, we were told that we had to leave immediately if we planned to go further. The cutoff for stop #4 was 11 AM, and it was 15 miles away. We were averaging 9-10 mph in the wind, so it was nearly impossible to make the cutoff time.

About 6 miles away from stop #4, we pulled off the road. We had to be honest with ourselves. We had completed 36 miles and would surpass a “metric century” (100 km) by the finish. Good enough. The ride back was faster now having a tailwind, but it also meant that we had no feeling of air in our faces to stay cool. The heat started to set in and we were getting tired. It wasn’t much easier than the way out.

We crossed the finish line after riding just over 72 miles. Not bad for me, considering my longest ride before that. I kept up with teammates who had done century rides in the past. I felt pretty good, but kept telling myself I would have made it all the way if it weren’t for the wind. I guess I’ll have to try again to know.

Looking back, it was an amazing experience. At one of the pre-ride dinners, someone said that riding is a bit like diabetes. You put your head down and power through. I don’t have diabetes, but I was proud to be riding alongside many who do, and many more who care deeply about those who do.