ALERT: Due to the inclement weather across much of the country, Medtronic deliveries are currently experiencing delays and there will be longer than normal hold times on the phone. Visit www.Diabetes.shop if you need to place an order, get a sensor or belt clip replacement, or check the status of your supply order. X
Home  »  Lifestyle   »   10,982 Miles with Diabetes 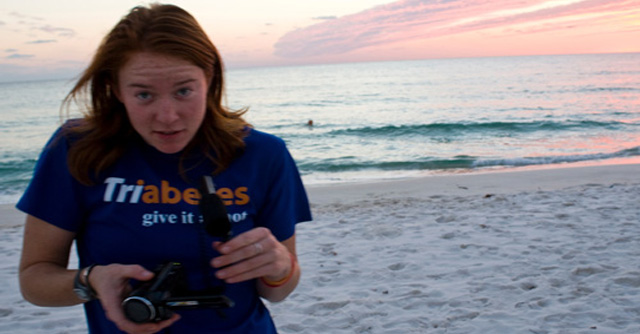 When I first met Blair Ryan more than a year ago, she and her Insulindependence colleague Peter Nerothin were introducing Amanda and me to a fantastic burrito place in Solano Beach, CA. With the waves of the Pacific crashing behind us, I knew right away I liked this classic SoCal woman with the big smile and contagious enthusiasm for staying fit and helping people with diabetes. And then she told me this amazing story of a cross-country trip to interview people with diabetes training for the Triabetes Program Wow! Today I’m so glad to have her share with you her story, diabetes tips and a valuable lesson about being “in good control.”

I went to my routine dentist appointment last month while visiting my family for Christmas. The hygienist read my chart and walked to the sink to wash her hands. “So do you still use an insulin pump?” she asked. I told her I did. “Your diabetes is in good control then?”
I confirmed that it was.

I couldn’t help but interpret that she gave the pump all the credit. While it is an integral part of my diabetes management, and I wouldn’t want to be without it, I’m compelled to take most of the responsibility. Through trial and error pump users cultivate good diabetes control, and the pump is our enabler.

It would take me an entire dentist appointment to properly explain how I use it as a tool to help me ride my bike 100 miles in the desert, race triathlons, surf and perform as a one-person crew while on assignment as a journalist.

In the Summer of 2010, I took an opportunity to complete a 10,982 mile circumnavigation of the nation in my Toyota Matrix to follow 10 individuals with Type 1 diabetes who accepted the challenge of completing an Ironman triathlon, as part of Insulindependence’s Triabetes program, to demonstrate that diabetes doesn’t limit them and to educate others in the diabetic community about the crucial role of exercise in managing the condition.

At each location I conducted and filmed formal interviews and captured video of the athletes in their home, work and training environments. I filmed athletes from my bike as they rode in the mountains of Colorado and the deserts of Arizona infusing insulin on the go. I needed to capture them in real-time, while we swam in two oceans, Great Lakes and while they inserted continuous glucose monitors between dinner and playing with their kids. I had to be at the relay exchanges, pool-side, attend CrossFit workouts, choir practices and doctor appointments. Purists of participant-observer journalism don’t look kindly on re-shoots and do-overs. There wasn’t time for it anyway.

When I returned from the trip, the faculty at the University of Oregon School of Journalism and Communication asked me to lay out the trip logistics and my process for their students of backpack journalism; a form of broadcast journalism that requires the journalist to be reporter, cameraman, editor and producer of stories, often in remote locations inaccessible to regular field reporters and their camera crews.

On the final website, I illustrated the gear I had with me: cameras, lenses, computer, external hard drives, editing software, bike, air mattress, etc. I talked about what I learned about file transferring and formatting video for the web.

Not relevant to the school’s audience, I left off my insulin pump and three months of other diabetes supplies. It wasn’t the place to describe how I made time to adjust basal rates for different intensities of exercise and to test my own blood, or to mention that I drink water to prevent dehydration-induced high blood sugars, and set phone alarms for infusion site changes – The other side of the story.

For ten weeks I didn’t sleep in the same bed for more than two nights in a row. It would have been too risky to rely on receiving pump supplies in the mail, so I timed my shipment with Medtronic and embarked with all the pump supplies I needed. My trip to South America in 2009 wasn’t as easy.

It was before mail order supplies was custom. I explained to the insurance company that I needed to leave the United States with a three months supply of all prescriptions. I swore that if they would approve the Medtronic order (overlapping my current set) and three months of other prescriptions ahead of schedule, they wouldn’t hear from me for three months. More than one doctor became involved on my behalf and Medtronic received the approval from the insurance in time to get my sites and reservoirs to me. Twelve hours before I flew to Argentina, the pharmacy handed over the insulin and test strips that filled my carry-on.

For the Triabetes Media Project I kept a prescription for insulin and test strips in the glove compartment and refilled it en route at the same stop I changed my car’s oil. Fitting.

With my pump, I only needed a small supply of syringes for backup. I had two glucagon kits. I kept one in the car and one in my main camera bag. I had three meters distributed throughout duffels. The cup holders of my car were host to energy bars, a jar of peanut butter, and sprinkled strawberry PopTarts (only for lows of course.)

During my visit with each athlete, I encouraged him or her to follow a schedule that reflected his or her normal routine. I loved this because I made very few decisions. However, it adds an aspect of adventure to planning a diabetes routine. Particularly in these situations you have to able live without knowing. Adaptation is the name of this game.

One day I was told we were leaving the house at 5:00 a.m. to ride. Because it was going to be 90 degrees then and 115 degrees when we were finished.

I did my best to organize my things so that I did not delay my subjects on mornings like those. Sometimes is went smoothly, other times less so. Either way, I had to be a good actress. It meant late nights getting organized so that nothing was left to set up in the morning when I am most likely to forget. While photos uploaded, I planned temporary basal rates for days with a lot of exercise. I made a list each night to remind myself of camera batteries charging in outlets and to grab the ice pack for my insulin cooler I put in the freezer. (I don’t leave insulin in the fridge when I travel. Instead, I cycle the cold source from a bag I won’t leave behind.)

On nights like these I break down the day ahead and make mental note of times where I might have a chance to come up for air, make adjustments and restock my backpack pockets with fruit snacks. On Ironman days there may be over 20 hours of action; two hours of photos and interviews while the athletes set up for the race, followed by the 17-hour competition and post race interviews. My insulin strategy on days like these is similar to what I do for long endurance workouts. Covering ground on my feet all day usually leads to higher insulin sensitivity and lower insulin needs.

Blood sugars prove that stress wreaks havoc on our bodies, and some days my strategy takes a different direction. Despite the exercise I did with the athletes of the Triabetes Media Project I sometimes had to increase my basal rate. The day the GPS led me through downtown Manhattan I knew what was to blame, other days it was lack of sleep and general demands of being alone on unknown roads with an unfamiliar destination. At times like those it was important to sit down – sometimes literally – to make necessary adjustments to my insulin regimen before moving on the next thing. It can be as short and simple as 20 seconds to test my blood. Remembering to take that moment is often the hardest part, but I have no choice. My blood sugar level is equivalent to the battery in my camera. The decisions I make using the result on my meter, allow me to be at the finish to get the photo.

Due to the nature of backpack journalism, the ability to do well with ambiguity is integral to a project’s success. This is a requirement of daily life for anyone with diabetes. During the Triabetes Media Project I had resources at every stop – unlike the hygienist, these were other people with diabetes who understood without explanation. Through its innovative recreation programs and Clubs like Triabetes, Insulindependence is growing a community of people with diabetes who are living active lives and sharing adaptive management strategies. That’s the name of the game and invite you to watch them playing hard in the Give it A Shot Films.

After my teeth cleaning in Ventura, my dentist came in to do a final exam. He looked at my chart and went to the sink to wash his hands. “So do you still use an insulin pump?” he asked. I told him I did. “Your diabetes is in good control then?”